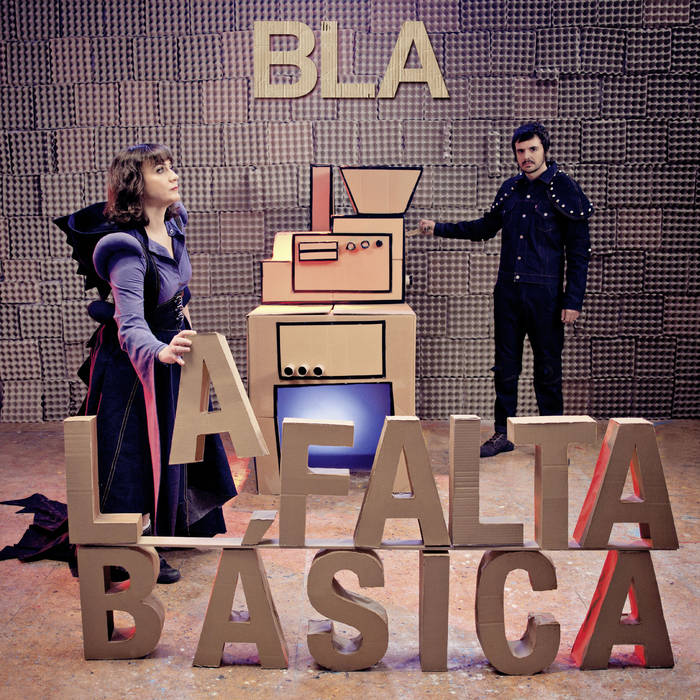 “La Mejor Enfermedad” was a significant leap in the musical career of Luis G. Morais and Belén Chanes: from wild, barefaced techno-pop of L-KAN to the mastered and paused electronic pop with BLA’s acoustic accents. After more than two years of silence, they’re back with “La Falta Básica”, with the belief that sometimes you can’t resist the call of the wild. Their amish clothes have turned into a lucky combination of outfits that fall somewhere between medieval and second industrial revolution laborers. The album, though it still maintains those small acoustic details and sporadic appearances of their beloved ukulele, is much richer in electronic sounds and danceable eighties rhythms, along the lines of groups like YAZOO, SILICON TEENS, TELEX and VISAGE, with touches of punk-pop from bands like HELEN LOVE and STEREO TOTAL.

The album’s title makes reference to the title of a book by the hungarian-english psychoanalyst Michael Balint. The author coined the term “falta básica” (“basic fault”) to talk about the empty, hollow feeling that some people suffer as a result of something or someone that or who was missing in their early infancy in a state before the development of language. It’s called “basic fault” because it affects the person’s entire structure without the person being able to understand the reason for the emptiness. This idea appears repeatedly on BLA’s new album; it talks about dissatisfaction and sadness without explanation on the forceful “Ni Hablar Del Sol”, and it talks about the most difficult gaping emotional holes in the crazed, ramonian “El Problema De Ser Un Problema”. It turns to the fault again on “Me Gustaría Que Te Llamaras Oliver” in which it is wished that the other could be two impossible things at the same time, himself and many others. It talks about identity on “Para Otros Soy Otra Cosa”, when it talks about being someone different according to who is looking at you, and about one’s inability to reaffirm his or her own idea of him or herself. And it also mentions the internal sadness on “Entrenadora De Penas” despite the contrast of the fast-paced techno-pop and hints of early DEPECHE MODE.

But if anything made Belén and Luis decide to give the album this name it’s the double meaning that they give to “La Falta Básica” – the already explained meaning, and the one that refers to the “basic fault of basic material goods necessary for life” that we are all generally suffering these days as a result of the ferocious system we are immersed in and the abuses by those who rule it. That’s what “Los Siervos De La Gleba” is about, a parallel between feudal society and current society in which BLA, without leaving the condemning behind, use their ingenuity to turn it into a passionate medieval love story in which they ask in exchange, at least, from life, for a more medieval love, more brutal, the love of dragons and fire and darkness. The subject directly inspired the wardrobe that Oscar Guimarey made for the cover and the album’s promotional image, with a touch of romance belonging to a medieval princess-dragon in denim for Belén and for Luis he made a laborer uniform with armor, also in denim. The philosophy moved Afi Oco and María LaMuy of I Loop You and BLA to choose cardboard as the total image for their cover photo and the video, as the representative element of austerity.

The album maintains the lively spirit and that special sense of humor that the Madrid-based duo celebrates, both inimitable, and plain as day on songs like “Canción De Amor Para Gente Odiosa” which would fit in fantastically to HUMAN LEAGUE’s repertoire; “Himno Reaccionario” and “Historia De Un Árbol Y Sus Habitantes” are both delicious, once again getting close to the sounds of DEPECHE MODE’s “Speak & Spell” with a great melody that evokes a world of imagination and fantasy. And to close the album, there is a version of “Mon Petit Ami”, written and produced by Bertrand Burgalat for APRIL MARCH in 1999, which wound up being the best declaration of intentions possible for BLA: humor, immediacy, fun, and imagination. We need to cover our basic faults with something.

Bandcamp Daily  your guide to the world of Bandcamp